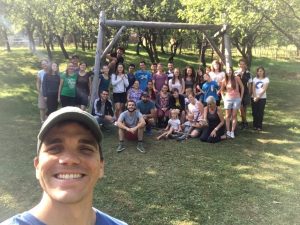 We held two camps, one a smaller retreat-like for older students, and one larger group. We were excited to see new and old campers come, and glad that our good friend K (name abbreviated) made the effort to come to camp, and hear all the good teaching and fellowship we have there. K and her friend have gone back to Germany now, so this was great to have a week together. We overheard another camper ask her when and how she became a Christian, and she shared how she knows that she came to Romania this year to become a Christian, and it happened through the Bible studies with Amy. It was so meaningful to hear this! At the second camp, an extremely shy 16 year old basically let himself be adopted by our 3 year-old son, Lewis, and came at his beck and call to do anything Lewis wanted him to (most often he was Lewis’ dog). The leader from his group told us how hard it was to hold a conversation with him, and though I tried to be friendly (he is an old piano student of mine), I didn’t get more than a few words out of him all week. He went home, and told his mom that the week’s Bible study on 1 Peter and all the sessions had changed his life, and he had decided to give his life to the Lord. We are praising God for him!  We also saw our little daughter Elena develop a soft heart toward the Lord over several weeks, and a day after we got back home, she told us she wanted to be a “real” Christian. This is another big reason we are thankful to the Lord. She prayed with us, and kept telling us it was “the best day of her life.”