The Power of God at Work Linda Kitchen, Amsterdam 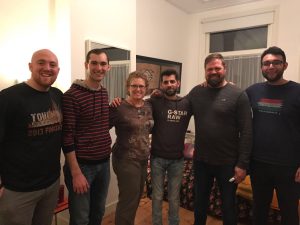 The Lord works in powerful and mysterious ways. It’s been exciting to see God at work through our ministry to the refugees in Amsterdam.

A short-term mission team joined us in the spring of 2017. We prayer walked around the refugee camp to lay the foundation for God to show up through divine appointments. Within days we saw the Lord answering prayers. We met Ahmad (name changed for protection). He professed faith in Jesus Christ and shared about his past persecution in Iran, which was the reason he fled to Europe.

During the week Ahmad seemed to be processing his own beliefs in comparison with Biblical truth. He had been attending church in Holland and had even helped lead an underground house church in Iran, but something seemed to not fully be clicking in Ahmad’s spiritual journey.

Ahmad was suffering from deep stress, depression and fears regarding his asylum situation. He received a negative response for status that left him desperate and in a mental, emotional and spiritual downward spiral – extremely fearful and questioning what’s next.

The night before a scheduled meeting, Ahmad had a bad toothache. Shortly afterwards he revealed a powerful breakthrough of humility and brokenness. Through a prior dream revelation and the tooth extraction (no kidding) he sensed a “release” of everything that burdened him. God’s power, through the message of the cross of Christ, entered his heart. He realized for the first time what Jesus had done for him, taking his sin on the cross and offering the gift of grace and everlasting life.

He has been set free from his bondage of fear, and has put his hope in Jesus alone. He said that before he was “doing Christian things, but now he has Jesus living inside of him.”

Please pray for Ahmad, that he stands in truth from God’s Word and not his own wisdom or strength.